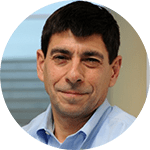 Calvin Cohen, M.D., M.Sc. is an Executive Director within the Medical Affairs department of Gilead Sciences. He joined Gilead in February 2015. His primary role within Medical Affairs is serving as the Global Medical Lead for tenofovir alafenamide, and the portfolio of regimens based on TAF.

Prior to joining Gilead, Dr. Cohen’s research focus was on HIV antiretrovirals trials since 1985. He served as the Director of Research for the non-profit Community Research Initiative of New England which was a site for the NIH funded Community based Trials network. He maintained an Internal Medicine practice focussed on HIV for 30 years within the Harvard system was a part-time Clinical Instructor at Harvard Medical School.


In this webinar, Dr. Calvin Cohen discusses different issues and
controversies in antiretroviral treatment, including:

*Doctrina d.o.o. takes care of the optimized educational process for people employed in pharmaceutical companies, for doctors, pharmacists,
nurses and other medical staff. All processes are conducted in accordance with the
General Regulation on Personal Data Protection (GDPR).
Learn more in our general terms and conditions.

This website uses cookies to improve your experience while you navigate through the website. Out of these, the cookies that are categorized as necessary are stored on your browser as they are essential for the working of basic functionalities of the website. We also use third-party cookies that help us analyze and understand how you use this website. These cookies will be stored in your browser only with your consent. You also have the option to opt-out of these cookies. But opting out of some of these cookies may affect your browsing experience.
Necessary Always Enabled
Necessary cookies are absolutely essential for the website to function properly. This category only includes cookies that ensures basic functionalities and security features of the website. These cookies do not store any personal information.
Non-necessary
Any cookies that may not be particularly necessary for the website to function and is used specifically to collect user personal data via analytics, ads, other embedded contents are termed as non-necessary cookies. It is mandatory to procure user consent prior to running these cookies on your website.
SAVE & ACCEPT